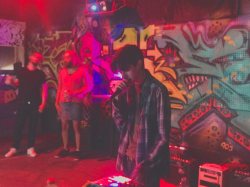 Julian A. Garcia makes rap music through an outlet called CFX Project that started out with him rapping, then eventually producing the instrumentals as well, and has now evolved into a full live band. It’s extremely tight; everything has happened exactly how he envisioned, and he loves what he’s doing and everyone he has to build with. He plans to drop a new body of work hopefully in November titled Hit Eject. The whole album was recorded in the basement at Seventh Circle in a room he and the homies converted into a vocal booth. He owes a lot to everyone involved with the space – that’s home.