1. How did you discover you were a poet?

Cat Doty, my poetry mother, discovered I was a poet–until then, I was just someone who wrote poems. I believe to be a poet implies an interaction between private and public spheres. It wasn’t until Cat entered my life that I thought about moving out of the private into the public realm in an attempt to not just record or imagine but to also communicate and share in this human experience.

2. Where is your favorite place to write?

The most practical place for me to write would have to be my home office where I’m surrounded by my dogs and books, I can play music in the background and burn incense… but I also cherish the stolen moments of writing–waiting to check out at the grocery, sitting in an airport, or at the salon where I work, scribbling on scrap paper or typing a note into my phone.

3. What role do you believe poets should play in today’s society?

I think poets are doing it, we are actively playing a role in society making our voices heard amidst such social and political turmoil, challenging the establishment through protest and poetry, and by being witness and interrogating the social order. Right now I’m at a writers’ conference where I’m being reinvigorated by the different ways poets can and are contributing to change and making a difference; for example, one participant (whose brother is incarcerated) distributed information about a national prison strike to take place between August 21, 2018 to September 9, 2018. If you’re interested, you can get involved and/or find updates about the prison strike at: It’s Going Down – Anarchist News and Analysis Incarcerated Workers Organizing Committee MAPS

4. Who is someone you consider inspirational to your life/work and why?

Because I am at a writing conference, my immediate thoughts of who I find inspirational is influenced by the works I’ve been encountering over this last week; therefore, swimming around in my brain among many other voices are: Stephanie Burt; Paisley Rekdal; Monica Youn; Nicole Sealy; Jennifer Tseng; C. Dale Young and David Treuer–for their energy, creativity, brilliance, curiosity, truth-seeking and telling, and unflinching resolve for dismantling the silencing of diverse voices.

5. How does your personal story influence the themes and content of your writing?

My sense of the world–as shaped by family history and my sexuality–definitely factors into my work. When people ask me what I write about, I half glibly, half sincerely answer, “Sex, death and everything in between.” There’s evidence of addiction and trauma; religion and love. My house burned down when I was a child; my father’s heart stopped when he was 45 and was comatose for over a year as a result until we ceased his life support; I left my husband for a woman: these experiences manifest themselves in my work in different ways. If woods or deer creep into my poems, I know it is my father surfacing. If my speaker is grappling with a relationship, the “I” and “you” tend to be gender neutral. And lately, aspects of my work as an esthetician are finding their way onto the page. But I am also grappling with how to write more politically overt; I’m trying to find the words to respond to the injustices around me.

6. What fictional character do you most relate to and why?

Medusa–though whether she was fictional or not is to be debated. 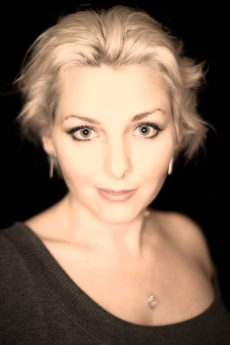 Flower Conroy Punch Drunk Press’s third Featured Woman Poet this August! She is the author of the chapbooks Facts About Snakes & Hearts; The Awful Suicidal Swans; and Escape to Nowhere.  Her poetry has appeared in American Literary Review, Prairie Schooner, Gargoyle and other journals. She is the current Poet Laureate of Key West.