like two in the morning or something
i couldn’t sleep so i called up God
and was all like “hey God,
do you want to meet up for some coffee?”
and God of course obliged me like always
so we’re sitting around Denny’s
drinking shitty coffee talking when i ask God
“is destiny a thing?”and God says “yes,”
and i say “that’s kind of a bummer,”
and God says “well, i don’t think that doesn’t mean you can’t be proud of the decisions you make,”
and i say “i guess,”

and then there’s an awkward pause,
the waitress comes by
refills our coffees
and we sip in silence and then i say
“alright, God, what number am i thinking of?”
God says 3.
it was 3.
What am I thinking now?
God says i’m thinking about destiny
and i was like
well yeah okay that might not have been the
best approach and then i took the salt shaker unscrewed the lid and poured the entire thing of salt into my cup of coffee.
God says “why did you do that?”
and i say “you seem surprised.
i thought you knew that i was going to do that? wasn’t it part of my destiny?”
and God was like
“no – that shit just came out of nowhere.”
i think God would have turned to God for answers in that moment if that made any sense.
and then i held God’s hand
and i said
look. i know what they say.
man plans and God laughs and that’s beautiful
but sometimes we just take the car off cruise
control and we start driving off the road in the middle of Nebraska and we’re pushing through the corn fields and doing donuts and blasting dizzy gillespie and it makes no damn sense and no one could have seen it coming, not even you, i’m sorry, but that’s why i put the salt in the coffee because some things weren’t written.
some things happen that weren’t meant to happen and those things were meant to happen but not in the sense that everyone saw it coming because
sometimes no one sees it coming.
even you, God.
sometimes it’s brutal and vicious hard work or a spark to the heart and it’s raw and honest and it’s tangential and that tangent shoots off into space like a monkey in an astronaut suit and it forms a new monkey planet with a new monkey God who too will have a moment of awe when realizing that your
children are not you.
they break the rules in the name of something.
love
or change
or dizzy gillespie
but yes.
it’s a thing that happens and it’ll catch us all off guard.

and then the waitress stole the cash in the register, took off her apron and busted out the door into the cold night.

From Stupid Flowers, the first collection of poetry by Brice Maiurro. 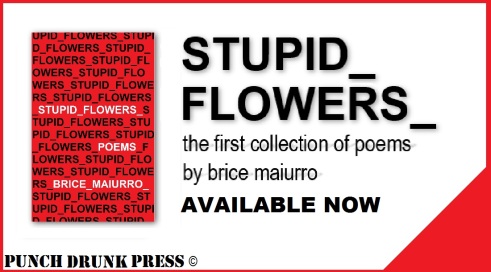 4 thoughts on “Talking to God Over Shitty Coffee at Denny’s, by Brice Maiurro”